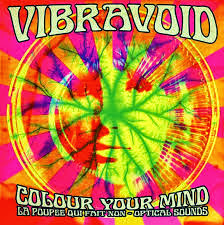 The German psychedelic rock band, Vibravoid are back with a new 7”. It has been a few years since they released one on this label. All three of the songs are cover songs, which Vibravoid are usually great at doing remakes of. So the 7” starts off with the title track originally recorded by the Australian band, Tyrnaround. I remember this Australian band from the Psychedelic Psauna compilation from Delirium records. Anyway, this is a great version with nice guitar and organ solos. Next is a cover of what was apparently a hit in France in 1966 and Jimmy Page supposedly played the guitar. La Poupee qui Fait non by Michel Polnareff). Yes… Christian sings in French, I think… hard to tell with all the delay. The last track is an obscure song by an LA band called Human expression who released 3 7”s in 1966-67 and disappeared. Optical Sound is about a bad LSD trip. Vibravoid is must be the perfect band to just continue forever making cool covers of obscure songs from the 60s. They do it so amazingly cool.

http://www.fruitsdemerrecords.com
Posted by Scott aka. Dr. Space at 9:38 AM