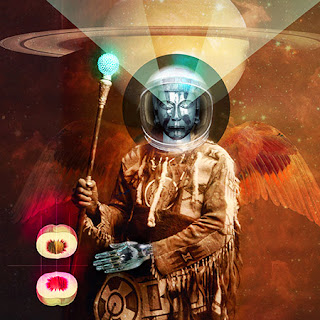 This came out a few months after Four Eyes and it was recorded in the same place with the same band line up (Andy, Rich, Clint plus Brian and John). Side 3 features three tracks that are in the same vein. After a slow space in with Slow Wakte, Keeping On has a more dominant synthesizer than a lot of Carlton Melton tracks and this one really takes off at the end with intertwined guitar solos. Spiderwebs is a very a dreamy drone piece to end the side. Flip the record over and you have the very intense Sarsen, which is quite hawkwind inspired and a killer track. The Splurge brings things back down to earth but the guitar riff is a bit sinister in nature and not at all like the beautiful themes from the previous side. Yet another tripped out LP by this great San Francisco guys.

http://www.carltonmeltonmusic.com
Posted by Scott aka. Dr. Space at 7:23 AM