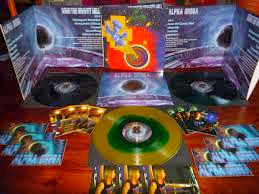 Wow.. how I was surprised to hear about this one! I did not know that this far out Australian band from Brisbane even existed anymore. I have their Psychedelometer CD from 2007 that I reviewed way back then.  Now they have a new full length record so get ready for a trip. Since the names of the musicians were coded on the earlier release (Captain Monotone, Stucifer (Stuart?)and Max Volume) I don’t know if it is the same people or not. I think it is the same three guys plus a 4th member now. Anyway, side A starts off with the title track, which is going all over the place and changing speeds and is quite chaotic and difficult to get a grasp of but Paul brings in some vocals inbetween some lead guitar passages and lots of spaced out sounds. Folow Me starts off dreamy before the nearly heavy metal but very 1980s Hawkwind style guitar riff kicks in but with a more raw sounds. Reminds me of some Huw Llloyd Langton stuff as well. Excession is next and features a spoken word vocal and is a really space slow track with some cool space synth sounds but the main focus on the psychedelic guitar lines. Polydream is heavily synth lead (like stuff Harvey Bainbridge might play) and more uptempo but seems like it ends just as it was going to take off somewhere interesting?? Ok, flip the record over now. Subsequent Retraction has a deep bass line and starts with a wild lead guitar line and slow drums before the drummer (Stuart) takes the lead to drive the pace of the track and Paul (Singer, guitarist, synth programmer and bass) heads off on a wild solo. This was certainly just a cool instrumental jam the band had. Atmosphere of Decay has what sounds like mostly programmed but many some real drums and layers of synths in another instrumental track. Tanquil has a totally different sound production and the volume output has dropped quite a bit in another instrumental track with a melodic guitar thread and nice solo but there is also something menacing that never quite clears the fog to bite you! Verzweiflung has a vocal and feeling of some of the recent Nik Turner and Space Ritual material and even the latest Darxtar record, Aged to Perfection. I believe in UFO’s ends this record with a track that has a very cool heavy guitar riff, some spoken word vocals and lots of spaced sounds but still a melodic thread to it. A pretty cool record and quite different than Psychedelometer. Enjoy the trip.. The vinyl is limted edition in a cool yellow-green color (100), green (200) black (200) and the yellow-green one comes with a poster, sticker and three postcards. A very nice release.


http://www.clostridiumrecords.de
Posted by Scott aka. Dr. Space at 12:22 AM