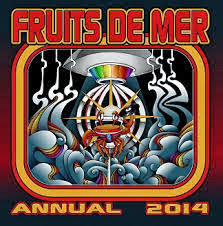 The label Fruits de Mer have a new 7" record that collects a few cover songs that Keith loves but was not sure where to publish them so why not on a crazy 7”! This one has three bands on it: The Giant Blue Zeta Puppies, The Raiders and Astralasia (6 tracks in 13mins). The GBZP starts things off with Joe 90 Theme. This is a frantic instrumental surf psych track originally by Barry Gray. Astralasia was a bit of a surprise to see them here doing a much more electronic and cool version of a sort of Country track by Geoff Goddard called Johnny Remember Me. The dreamy female vocal fits really cool in this version. Far out. The GBZP return with Lost in Space (by John Williams) and this track is also quite a fast one with a bit of a slight western theme as well with some really cool synth sounds. The Raiders perform the CJT Midgley/Robin White track, I remember. This slows things down a lot and has this almost Hawaiian tremolo like guitar that is eerie but also beautiful. Astralasia close with Johnny in Dub, which is strange sounding reworking of the track they played before.

http://www.fruitsdemerrecords.com
Posted by Scott aka. Dr. Space at 9:50 AM