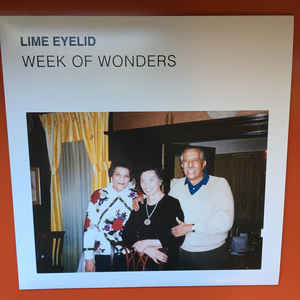 Lime Eyelid is an experimental project from Josh Schultz (Travelling Circle drummer) using old school 4 track tape technology and strange old synths like the Realistic Moog Concert Mate MG-1, a light theremin, tape delays, Vox repeat Percussion, etc… This LP is pressed in only 110 copies and features 3 tracks per side. 1 starts things off with some drums, eerie keyboards. This track reminds me a bit of tracks by Aron (Black Beacon). I Saw Waves is a track that goes in waves and features some singing. Reminds me of a very slow and stoned Velvet Underground. 3, is next and the last on side A. IT features a sort of bass line (Synth?), some drum sounds and a slow build with the main line played by the synth. The music again has this dark and mysterious vibe like you are going down a long dark tunnel. The same theme is repeated over and over with some slight variations and a few extra sounds and cymbals thrown in along the way. Side B starts off with 4. A high pitched sound from the Theremin over a drone synth that slowly wavers. Later, some horn or voice like sounds enter in and counter the synth line.  Interesting experiment in sound with some tape effects at the end. 5 features a more thin sounding drum and guitar. Some strange synth and other sounds compliment the main theme hammered out. Dark Psych. 6 is the final track on this interesting musical journey. It starts with a happy Casio like keyboard sound with a bit of drums thrown in from time to time. Something you might hear at a carnival, very old one. Always cool to hear an album like this where someone makes the music they hear inside their head with no boundaries and lets us hear it! Contact Josh for a copy... 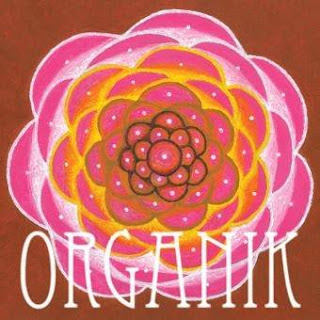 Organik are a Danish trio featuring Per Brems-Therkelsen on guitars (also making a lot of synth like sounds with effects pedals), Brian Bentzen on bass guitar and Stephan Green on drums/percussion. Not sure who plays the keyboards and synths. The spoken words on Caged and are performed by a famous Danish rapper, MC Einar. Black Desert (See video below) starts things off with some wind, didgeridoo (played by Michael Marienlund) and then main track begins with a sort of riff that reminds me a lot of Glowsun (French stoner rock band). A cool floating track with some nice spacey guitars in the middle section. It gets really heavy and metallic at the end as it builds up. Amazing instrumental track! Caged features MC Einar. This one starts very slow and moody with some nice clean guitar and bass lines before the keyboards/hand drums float in and the vocals start and he tells a story of a trip gone wrong. A very different but great song with great melody and feeling.  Collective has a similar melodic theme until the doom guitar riff kicks in and the mood changes and a heavy metal riff rocker sets in and the tempo picks up. This is the heaviest track on the record.  The end section features some nice wah guitar and wah bass. I like the slide guitar section over the wah bass and spacey background. Great song. Liquid Embrace starts with a keyboard, eerie like organ (played by Valdemar) as the drums and bass kick in. After a minute or so, the mood and track changes quite a lot as the organ theme comes in and Per sort of follows this on the guitar and then heads off into his own solo as the organ drops out. The track continues with a very beautiful theme for a while before building up again into another guitar solo section. This is a very long track with a lot of sections and changes but they always keep it interesting. Soul Manure is the last track and starts with a droning synth and then a great bass line comes in, a small vocal utterance, then some spacey sounds as the drums come in and the track starts to build and at three minutes we are into a full space rock mode and in full flight! The Hermit is the last track and starts with some reverby guitar and then goes into a full on Kyuss like stoner rock groove with a riff from Iron Maiden as well.  Lots of cool changes in this hard rocking number. A damn good and varied album. I really hope these guys can find a great label to release this one on. Highly recommended. 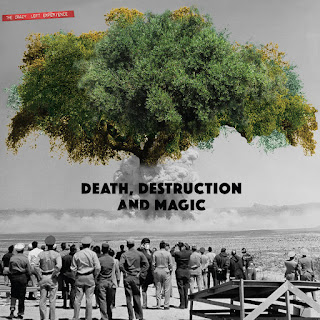 This is a really cool new instrumental Portuguese band. This album was recorded live in the studio in 2017. The album features 4 jams, the 4 words of the title of the LP. The band is a trio of Rui, Luís and Tiago. Death starts things off with a slow building jam with some nice guitar with a bit of delay on it as Rui (drums) and Tiago keep the groove slow and steady and let Luís go for it on the guitar. This jam goes for about 8mins and then Destruction takes us for a ride for the next 15! This track features more guitar exploration and less straight up acid space rock soloing.  Some of it is very spaced out and exploratory music towards the end of the track that fades out. Side B starts with AND. IT starts off quite slowly with some nice bass lines, a bit of delays, a quiet slow building guitar and very dreamy. Magic takes the previous jam and brings in some really nice, almost bluesy spacey guitar, which drives the rest of the track.  Nice…

In support of their European tour, the band recorded a new song and a cover song and Kenny was giving these away to some special friends and I happen to get one (Tak!!). The title track (See video below) starts things off with a solo, a thumping bass line and a relaxed vocal to start. The music builds up nicely as the vocal also becomes more powerful. Nice harmony guitars and a bit of Thin Lizzy vibe.  How cool for the band to choose to cover, This is your Song from the Fly to the Rainbow album by the Scorpions. So how do they manage? Musically they perform it a bit too close to the original with the same tempo and nearly the same guitar solo as well. Vocally, I have to say, it is quite difficult to compare to Klaus Meine.  Good choice of tracks to cover but not even close to as good as the original.  Rather than just do an exact copy, they should have tried to make it their own some how. 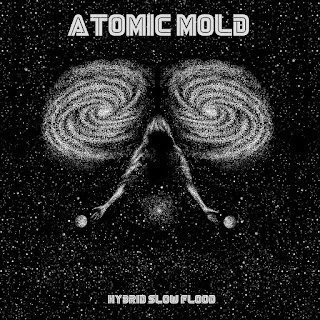 This is the 2nd album from this mostly instrumental Italian trio and features 4 tracks. The opening doomy track Hypnosis (See video below) starts things off and features a sort of dreamy vocal like Mars Red Sky. This track is pretty repetitive and almost totally riffs and heavy bass and drums. I Fall is a nearly 14min track. This track could have been quite a bit shorter as nothing that interesting happens for quite a long time just minor variations on the heavy stoned riff. Around 11:20, they double the tempo and the dreamy vocal returns briefly. Woodline is a 19 min track that starts as a small variation on the current hypnotic doom repetition and it slows down and is a bit spacey at the end and then finally we get some pretty cool lead guitar with wah and some other effects starting around 5-6mins and running for quite a while before the riffs return and then another long section with some cool guitar work.  This track is by far the best and most interesting track on the record. Yellow Crocodile is a shorter and fast rocker to end the album. A bit like Motorhead to start and a nice change of pace before a more stoner doom groove kicks in. This one rocks!