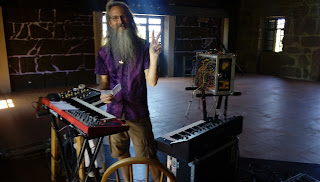 Sue and I showed up about 14 and set up a merch table and moved all my gear onto the stage and I could start to set up. The people at the café, were really looking forward to the afternoon.   Martin and his wife showed up soon after us and we loaded in the mixer and PA and Martin’s guitars, etc..

It took us about 45 mins and we had set up, had a little soundcheck and then could go outside and relax and see how was going to show up for this afternoon show. 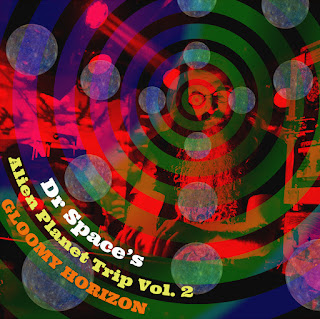 At 15:15, I started to play my new record, Dr Space’s Alien Planet Trip Vol 2- Gloomy Horizon on the PA.  The weather was just amazing so no one wanted to be inside and listen to it and most people were hanging out at the tables on the other side of the building. Pity.. You can hear the record here!

At 16, Martin and I hit the stage and played for about an hour. We had met once before and played together for about 2hrs and it went very well and I had some ideas of where to start but it was more or less all improvised. We played the 4 main ideas I had and then I think 2 more. Martin played some extremely cool guitar and experimented with loops as well. There were some very heavy riffs and Martin really ripped it up at times. Some of you might know him from this 70s bands, Wicked Lady and Dark. As for the audience, there were about 10-15 people inside and about the same number outside in the sun. 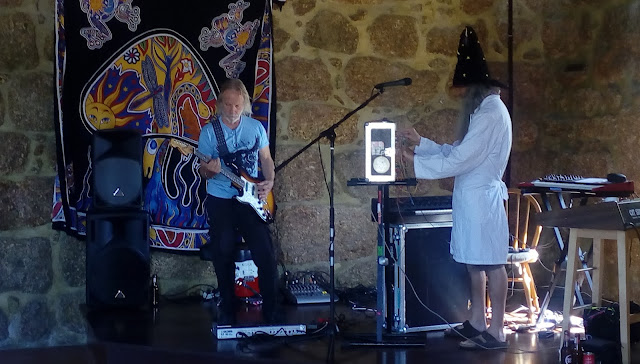 The music was pretty tripped out. It was nice to have some of my friends show up like Nick, Mad, Olias, Steve, Isabelle, Mike, Pat, Cam, Mandy, Toon, Marion, Didi and his friends from Belgium, and a few more. Only sold one record!

A very nice afternoon and the people running the café were great and enjoyed it as well…. Next time….. Thanks to Sue and Kate for the pictures. This was the 3rd piece we played. Enjoy..