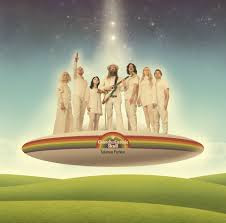 This is a band from the UK that has been getting some interesting press. This is their 2nd record and first on the Bilocation label. The band is a 7 piece with three women and four men. I am really on the fence with this record. Some of the tracks are pretty cool but a lot of it I just don’t get the pop music stuff. I did not really like the first couple of pop songs that open the album. Sorry. There is some great female vocals and Cold Sweat is a very Thin Lizzy inspired tune but damn, they repeat the chorus so much you want to kill them by the end of the track! (see the official video below). Timehole is another uptempo rocker. The cards that you’re playing is a more simple track (the male vocalist just repeats the title over and over for the first 2mins.  The piano part is the best part of the song. A 2nd vocalist comes in later and repeats the title over and over and then the female chorus comes in and makes some variations and now the organ does a short solo. Later a third male vocalist sings the same thing. Paper Aeroplane is a lot like Whiter Shade of Pale in some ways, the way it starts with the vocal and organ. Female vocals are cool on this track. It takes a drastic turn before 2mins and the drums kick in and off we go in a more rocking direction. The Devil Again is a moody one to end and one of the best tracks.

It is like the band Ghost. I just don’t really get it? It is pop music disguised as heavy metal. These guys are have a lot of pop inspiration from Abba, ELO but sadly, the parts, I did not like from these bands. There are some great moody tracks. You just have to check it out for yourself and decide if this is for you.