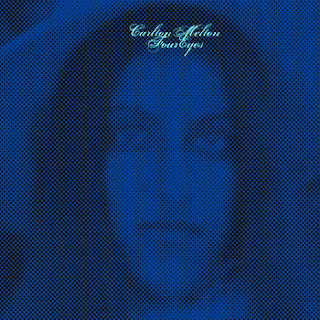 Carlton Melton are back with two new records within a couple of months and once again with John McBain (Ex- Monster Magnet, Wellwater Conspiracy) playing and mixing. The opening track called Personal Space is a long space out with three guitars (Ricj, Andy and John) with Clint on the bass and Brian on drums. This might be the track they opened the recent concert with here in Copenhagen. Slow and spacey with some synths bubbling up now and then but mostly layers of guitar dominate the sound. After a while one of the three lets loose with a guitar solo and then another as well and the dynamic gets much heavier in this mostly drone style track. Road Swagger and the first song on side B have just Andy, Rich and John, no bass. This one is a heavier guitar riff that the song builds and spaces out on. Quite intense and noisy. Glass Home starts spacey like Pink Floyd with some cool synths as well as beautiful floating guitar lines. Mist ends this record. A heavier more fuzzed out, revereb drenched guitar dominates and gives this one a sound that really freaks out your ears with the frequencies. Trippy stuff. What these guys do is pretty cool. Music for real stoners and trippers.

http://www.carltonmeltonmusic.com http://www.blackestrainbow.com
Posted by Scott aka. Dr. Space at 7:22 AM