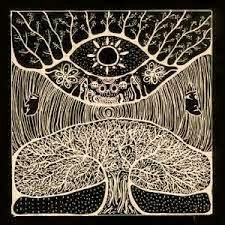 I have never heard of this Japanese artist before. The record features 5 tracks and starts with a really nice acoustic track with spoken words and flute and a mellow beautiful vibe and it even later includes some nice sitar playing as well. This song made me smile. Zo No Senaka continues the mood of the opening track with more sitar but now there is a mid-paced driving song with some space rock elements as well. Later on a really nice wah guitar solo compliments that change in the track well. Tree Smoke is an instrumental track and has great dynamics mixing cool guitar, heavy riffs, sitar, and a really spacey atmosphere. Cool stuff. Flip the record over and you start off with Lazy Stoned Monk.  Think that you are at a monastery and you hear the sound of dripping water, some distance voices, sounds, then the deep drone of sound begins to trickle in, some bells, and then some slow building guitar lines and percussion creep into…you get the idea…  Dawn ends the record with a nice long psychedelic guitar driven piece but also with some sitar. This album really caught me by surprise.. I have not seen anyone write about it and it is really excellent. Good for Sunday morning and fantastic artwork.. I love the cover.

http://www.soundeffects-records.gr
Posted by Scott aka. Dr. Space at 9:44 AM