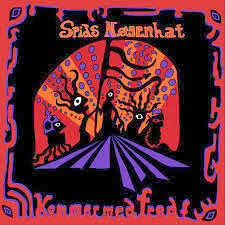 Spids Nøgenhat produced their first studio record nearly 15 years ago. I got to see them play a few times in the late 90’s and travel with the band to Hannover to play their only show outside of Denmark. A few years ago, Ralph Rjeily, enticed the band to come back and start playing again and they did including a very successful concert at Roskilde Festival that was released on a limited edition vinyl record. The guys who make up this band are very busy with their regular bands which includes Baby Woodrose, Aron, and many other projects. Anyway, here is the new record and I think it is really cool. A bit more laid back and less psychedelic  than the first record but totally in the vibe of the early 70s bands like Alrune Rød.  The LP opens up with a spaced intro just like on the band’s debut before Mere Lys (More Light) starts with a really catchy guitar line and Guf singing and playing the acoustic guitar but features a quite cool psych section but short. Lolland Falster (the band has a cool video for this one) is about this beautiful part of Denmark sound of Copenhagen. Lever vi Nu (Do we live now?) is a more dreamy track and the acoustic guitar is complimented with some organ and psychedelic guitar, of course! Den Gennemsigtige Mand is a cover song (written by Hans Vinding and Furekåben) that this band and also Dragontears have played live for many years. It is the longest and probably the most passionate and best song on the record. The solo by Aron just cuts through the sound and goes straight into your brain, while the background just remains totally spaced out but a beautiful melody is retained. I just love this song. Spids Nøgenhat I Græsset (mushroom in the grass) is a mellow track about taking a mushroom trip. Spids Nøgenhat is the Danish name for the liberty cap, psychoactive variety. Again, Aron comes through with a solo that pierces the cranium right through your left ear (if you have headphones on). Jørden Kalder (The world calls) is slow track with no drums on the song, just drones, layers of spaced out guitars and some space sounds and floating organ. Vand, Brød og Te (Water, Bread and Tea) is another one the band has been playing for many years including at Lorenzo’s solo shows. He wrote it! Henrik plays a super cool wah solo on this track. Fred (Peace) ends the record and this is a really cool hippie tribal psychedelic trip track. Lovely stuff.. A super cool record and just what you would expect from this group of Danish psych supertars! Our good friend Ralph would love this record if he were here with us today….  Peace, love and good music..