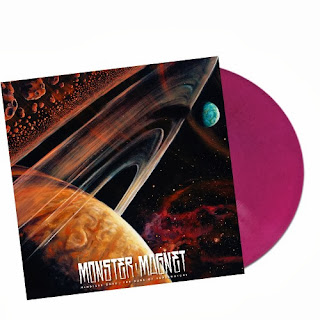 Monster Magnet is back with their first new material in 3 years and Dave has gone back to his roots! No more producers and recording in LA but down to the home studio of Phil (who plays bass and guitar) and two tracks of psychedelic rock like they made in the mid 90s. Dave is no longer scared or told no from some fucking producer to not put so much delay on the vocals,etc.. and back to doing just what he wants to do. Anyway, Mindless One is an uptemp rocker that could easily have been on Dopes to Infinity!  Not quite psychedelic enough for Superjudge though! Gavin does a great job of filling in the Ed Mundell like guitar licks as well as throwing in some of his own unique style. From the video I can see that Phil is doing quite a bit of the lead guitar as well. Quite a psychedelic track but still that mainstream MM feel with the repeated chorus,etc.. The Duke of Supernatural is more laid back with a keyboard that floats with groove. The drums are really killer on this track. IT is all familiar, yet cool and new and fresh. That is Dave’s magic, who I have to say, sounds as good as ever on vocals. A very cool 12”, I just wish that at least one of these tracks had been exclusive to make it worth shelling out the cash for this one. Only 300 made in purple and 300 in gold. The band will be in Copenhagen on Jan 14th, 2014 with Church of Misery as support. I will be there!

http://www.monstermagnet.net http://www.napalmrecords.com
Posted by Scott aka. Dr. Space at 7:29 AM