Church of Misery- Thy Kingdom Scum (Rise Above Records) 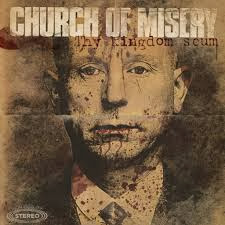 I probably don’t need to review this record damn, when a band you like makes their best record ever 10 years into their career, you need to stand up and yell about it!  I was quite uncertain when Tom left COM for Sweden what would happen and they had a new guitar player but he only lasted for a short tour and then they got Ikuma ((ex-DHIDALAH, a band I have never heard of) and now have made a totally killer record. Tatsu the bass player still writes all the songs but having Ikuma around must have done something as the music is just more groovy, more spaced out at times but still those killer Sabbath inspired heavy riffs (yes they use a lot of them over and over and over) but I am just pretty hooked on this new record and the opening track  BTK is an instrumental and but does feature some spoken word samples, presumably from or about the serial killer Dennis Rader. Lambs to the Slaughter (about Ian Brady and Myra Hindley- a nasty duo) slows things down a bit and Hideki actually sings more clearly than ever on these track and this one features a really cool psychedelic guitar solo but too short.  Brother Bishop (about Gary Heidnik) closes side A and starts with a really killer guitar riff and will have you headbanging for sure. Later on a really bluesy and killer solo kicks in with a bit of panning on the sound as well. Now to side 2 where three more serial killers get a chance to be sung about. Dennis Andrew Nilsen who did some nasty stuff at Canley Gardens apparently, is next and starts with a slow spacey bluesy intro after the spoken word intro. Then it really takes off with some cool solos and mean nasty vocals.  A big surprise is a Quartermass song called One Blind Mice is squeezed in before All Hallow’s Eve (John Linley Frazier). Something tells me Quartemass never imagined their song being played quite like this! This one starts off like a jam with some killer bass playing and distorted solo and sound before the main theme of the song takes shape.  Düsseldorf Monster (Peter Kurten) is the last track and takes the entire side C and is one of the best on the record as it gives the band space to really jam a bit. I still don’t understand not putting something on the 4th side. Such a waste, like buying a beer with only half the bottle filled. I look forward to seeing the band in Copenhagen on Jan 14th with Monster Magnet!

http://www.churchofmisery.net http://www.riseaboverecords.com
Posted by Scott aka. Dr. Space at 12:25 AM