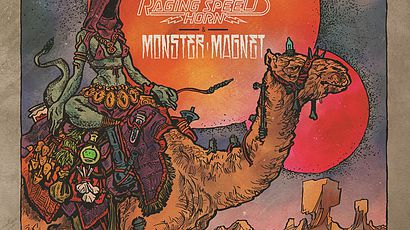 This single is cooperation between H42 and the Desertfest London.  Raging Speedhorn is a band that disappeared from the scene some years ago but reappeared in 2014 playing some shows. The band released their first new material last year on a 7” on Palm Reader Records in 300 copies. It turned out to be the same song as this one, Halfway to Hell. This is a pretty intense track and shows the band back on track! Everyone knows Monster Magnet and their side sadly is also nothing new or unreleased but the new recorded version for the Cobra and Snakes sessions of Hallucination Bomb. These are great songs but you have to decide whether it is worth buying this 7” just for collecting, being rare (150 clear red, 200 clear orange, 20 test pressing)…. You choose..