March 2nd
I am at the airport with Kasper, the organizer of the event and guitarist in Måneskjold. We are waiting for the band to arrive. Plane was on time from Luton and all is well. It has stopped raining after pouring down all day.  The band came out and were in a good mood but tired and hungry. We made our way to the bus, which did not come so we took the train to the city center. Nik said he had a terrible car accident just the other day and was lucky to be alive. His car flipped two times and end up in a ditch. Front end is totaled but he is ok but he says he feels pretty beat up. He looked and sounded tired. I left them for the night in Kasper’s hands. He will take them for some food and to an apartment. We meet up at the venue at 15 tomorrow.

Kasper came by at 12:30 and picked up my gear for the gig. It was on the stage when I arrived at about 15. The Måneskjold back line was set up and he and his crew were working on the light projections, sheets, etc.. The mood was great. Will was the sound man so this was a good thing, as he does a great job.  Nik and the band had not arrived yet. I went about just setting my stuff up so that I would be ready.  They showed up about 15:30 and it was nice to meet them and we went about doing the soundcheck. We played Cybernetic Love as they had changed the set list from what they told me a week ago. I did not know this one. We did a bit of Reefer Madness and Steppenwolf as well. It went ok but Gary, the bass player was not happy at all but did a poor job of communicating what was wrong so how could Will help him out??
10mins after we finished the Yuri Gagarin guys had arrived so I only had a few minutes to sit down before I was up there soundchecking again. This was good though as I needed to get the vibe right for playing with another band I had never played with but knew their records. Robin, their normal synth player is very busy and has small children so they need someone who can fill in. We get on well. I know Leif and Christian (bass and lead guitarist best) and not the other guys at all but they are all super cool. We soundchecked Cluster of Minds from the new record a couple of times and it sounded good. I have a great monitor sound.

19 The food has just arrived but the venue has been very unresponsive in getting the band any beers even after many requests and now the food was finally here and still no beer. We finally did get endless cheap Danish Royal Pilsner beer.  Food was a nice veggie Indian curry with potato, carrot and chickpea but basically no chile. Lots of Rice.. People enjoyed it but in the backstage light the sauce looked much redder than it actually was. I jocked the chef lost a finger and some blood in the food so it was no longer vegetarian!

Måneskjold had a long soundcheck and never seem to get it quite they way they wanted it. IT is a tough band to get just right with three guitars who all play leads at different times and all have very different guitar tones. This would me more difficult if they all sounded the same??

20:15 and Måneskjold hit the stage. I did not hang out in the backstage. I stayed upstairs nearly all the time recording all the bands and talking with friends and fans. Very cool that Evert, who put on the Space and Rock Festival in Jönkoping back in 1998 with Man, The Moor, Spacious Mind, Dark Sun, Pseudo Sun, and many other cool bands was here. Nik was a special guest at the festival and played with most bands.  Seems he does not remember it much according to Evert.  Anyway… some people from Sweden. There were about 50 people for the Måneskjold set. I don’t remember the order. They played one new song but otherwise it was the same set they have been playing for 2 years. Great songs that have really developed. Nik appeared on stage for the end of She lives in a Pyramid and then Kasper started up the riff from the Hawkwind song Psychedelic Warlords and they had a jam on that for 10mins. The crowd dug it and so did Nick. I am sure he could hear nothing of what he was playing though. Some of it was good but not at the start. Fun though.

We were now behind schedule as they had gone 20mins over but it was no stress. A lot more people here now. I think Kasper said they have 120 paid, which is not bad for a Thursday night and 275kr for 3 bands. Two international. Yuri was pretty fast to set up and I think we only started 15 mins late. This was really fun to play this super heavy space rock stuff. I was really in the zone and trying to focus on the notes I had made for the songs but the guys had the same attitude as Nik, just do what you do, fuck the notes and just play along. Anyway, the place was pretty full now and people were into it. The band was way louder on stage so I had to turn up to hear myself. Will had to adjust.  Great guys and powerful stuff. The set was all new songs except the opener, Sonic Invasion. My favorite to play was probably the New Order or At the Center.  Set was about 45mins and went by pretty fast. I thought it went pretty well but I did get lost in Oblivion and sound sounds were off… Band said they did not hear much of what I played but was sure it was great. They love what I am doing and want me to play more with them. They have invited me to come up and play with them in Göteborg.

Set List: Sonic Invasion, Cluster of Minds, The New Order, Sea of Dust, At the Center of Infinity, Oblivion

Nik Turner and the guys hit the stage a bit after 2300 and there was less people now than earlier but still a good crowd.  It was me, Nik, Angel (Dancer), Meurig Giffiths on drums (also plays in Sendelica), Stephen Jones on guitar, and Gary Smart on bass. We opened with an old Calvert poem, Co pilots of Spaceship earth and into Watching the Grass Grow. This is a powerful opening. Sounds was great on the stage and I did not play as dense a space sound as with Yuri Gagarin and left much more space.  Some how, Reefer Madness was started and it was not even on the set list and it was just not good. I don’t think Nik sings it well anymore.  We should not have played that. The stuff from the new album was all great, Fallen Angel, Time Crypt, Somethings not Right.  Walking Backwards was really fun to play. The ICU stuff is very punky with a lot of energy, Cybernetic Love, LSD, Space Invaders.. Crowd seem to really get into these space punk songs.

D-Rider was the first real Hawkwind song appearing nearly half way into the set and the crowd really loved this. I felt I played pretty cool stuff on this one. Sonic Attack, I went mad on the synths and think it was very cool. Afterwards, Angel told me she thought I was totally amazing and she loved what it was that I played. Quite a nice compliment. She also has really cool costumes and the dancing is a good distraction and fun for the audience and she does it well. 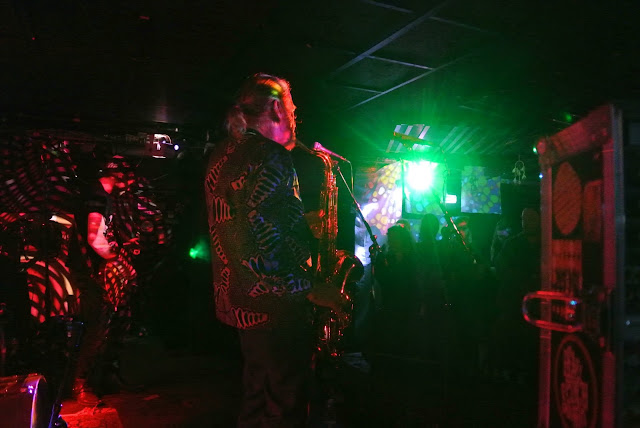 Not a lot of Hawkwind songs and as it was late and a Thursday night by the time we played Master of the Universe and Brainstorm there were about 30 people left, which was a pity but they loved it.  It was great fun and Nik was in a good mood and even got the audience dancing with something they called Dangle at the end. Fun night and Nik still gives a hell of a show for a guy 76 years old.. Musically it was hit and miss with some of it really great and sometimes not really good enough. I had a blast. Spoke to Will, the great sound man and he was a bit unhappy that Nik was quite nasty to him about not being able to hear himself but how can Will fix it if Nik does not say anything until 1hr and 50mins into the concert? We did a 2hr soundcheck and Will placed the monitors where they were, same settings and checked them standing on stage himself so the way Nik hears had changed. Anyway, if you have a problem, you say it after the first song? Right..  It was a super fun night for everyone, even if the Space Ritual show was a bit rough around the edges at times!