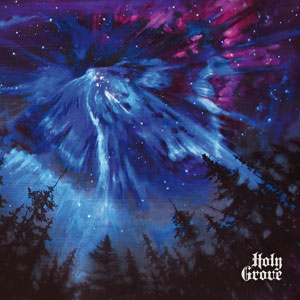 Hole Grove, from Oregon, USA are a doom rock band four piece with a female singer. No one is credited for drums on the record though but a guy named Ryan is listed on their web page. The bio page writes them up comparing them to Bang, Grand Funk and Deep Purple and I have to say this is very misleading. There are a lot of female singers these days, which is kind of cool but not everyone digs that.. The album was produced by the band with assistance from Billy Anderson.  The CD/LP features 7 songs. Death of Magic starts things off with a some intense riff rock. Andrea has a nice voice and tells some interesting stories. I wish it included a small booklet with more cool artwork and the lyrics. Some nice chorus guitar parts and a short wah guitar solo. You can hear it below. Nix has this distant sound to start and then it really kicks in massive and a bit doomy. Like the effect on the bass and a nice guitar section before the return of the vocal. Pretty psychedelic at the end. Holy Grove is a pretty long track but again this doomy mysterious vibe prevails. Huntress is another doomy number with some intense vocals but they really kick it up with some nice groove which I had been missing a bit. Caravan kicks up the groove again and you will find your head banging. Hanged Man starts with some solo vocals that slowly fade up and tell a tragic story. A slow doomy track to start and then a good rocking groove at the end. Safe Return ends the album with another uptempo track with some intense vocals.  I am still on the fence about this record after 3 listens. Some cool tracks but not that original, lots of people doing stuff like this, are they better than the others? You have to decide. I know people will complain about the singer, as this genre is getting quite a few female singers and it make you stand out more than the men and a lot of them sound a lot a like, at least that is what people think or perceive. Give Holy Grove a chance and check them out and make your own decision.


http://holygrove.bandcamp.com
Posted by Scott aka. Dr. Space at 3:35 AM