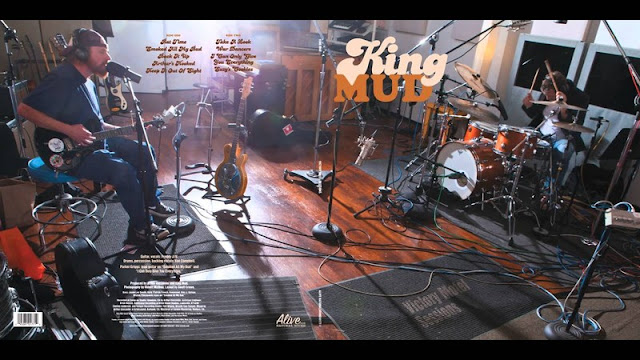 King Mud is Van Campbell (BLACK DIAMOND HEAVIES) on drums, percussion and backing vocals and Freddy J IV  (LEFT LANE CRUISER) on guitar and vocals. The record also features guitarist Parker Griggs (Radio Moscow) on two tracks. At first I thought these guys were another duo but there is some kick ass bass laid down by Jaxon Swain and bit of Hammond by Alex and harp by Patrick as well. Anyway, the guys got together in Los Angeles and kicked out this album of blues stuff. I have never heard of these guys or their other bands before but I quite liked the record. The opener starts with the drums but then the bass line and guitar kicks in with a great energy as they get down to some slide driven nasty blues rock. Smoked all my Bud (hear below) features Parker on the lead guitar and is a very cool track!  Back it up is a slow bluesy track with a nice groove and cool vocal complimented by some slide guitar. Arthur’s Hooked has some additional percussion and features the harp and hammond to mix things up a bit.  Keep it out of Sight is a Wilco Johnson tune and this has a killer groove and is a great rocked up version. Take a Look is a stripped down track with slide guitar and vocals and a bit of cymbals and then a very happy country like slide driven track takes off and one of the longest tracks at just over 5mins. War Dancers is the fastest track on the record and a quick one that just hits and runs. I can only give you Everything sees the return of Parker and some more lead guitar and a real pity they faded this one out as a cool jam was just starting.
Smoked all all my Bud appears again but a different version or is this Suzy’s Cookies as he sings Smoked all my Bud? Strange.. Nice slide work.  It has a tough riff but slows things down for a more dark vibe a few organ thrown in as well. Blood River ends the CD.


https://www.facebook.com/kingmudoffering
Posted by Scott aka. Dr. Space at 12:23 PM