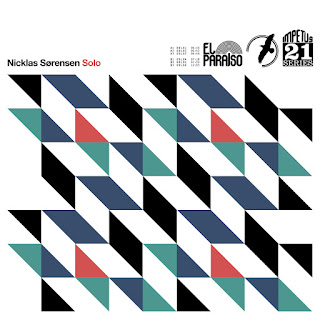 Nicklas is the guitar player in the all instrumental Danish band, Papir. He is a very talented musician. It seems that Nicklas had a lot of musical ideas that he wanted to explore outside of the limits of Papir. All the members of Papir play on the record as well as Jonas Munk (Causa Sui), who played various keyboards and synthesizers on all the tracks except Solo2 as well as mixed and mastered the record. The record features 6 track, 3 per side and starts off with Solo1 and it features some nice melodic guitar over a steady Christian/Christoffer groove. Jonas layers in some organ as well filling in the bottom of the sound but still allowing the guitar parts to lead.  Nice track with some repeated themes. In the end it builds up a lot like a Papir track but with out the intense lead guitar. The spacey keyboard part sort of increases instead for a real dreamy feel. Solo 2 is a quite slow piece with drums and bass and a slow gliding guitar line. This is a very peaceful piece of music. Solo3 starts with a really cool looped guitar and then Nicklas comes in with another melodic line over the top. You can just hear the high hat (I think) but no other drums yet. Eventually a bass line joins the track and then a repetitive keyboard line. The track grows as a new looped guitar is started but the keyboards grow to dominate this track with Nicklas almost disappearing for a while.  There are no real drums per se. Lots of looped Krauty stuff.  Side B starts with Solo4. I bet you guessed that? The tracks on side A were all between 6 and 7 mins and now the new tracks are two 7min tracks and a long 12min one that seals the side. Solo4 starts with some melodic guitar lines, a few sound manipulations (a bit like a short note of backwards guitar and you hear it repeated here and there) and floating keyboards and a simple beat (bass, bass drum or synthesizer??). The track nearly fades out and then a new guitar line starts and another one on top. Very beautiful stuff that runs to the end. Solo5 sees the return of the Papir band with a simple sort of groove and guitar line (like the effects he uses), some hand drums kick in as the keyboards also become more important to the sound as well. A nice guitar solo is slowly building up which is one of the first. The track enters into a transition phase after the solo before Nicklas returns with some more delays and the guitar is panned from side to side and plays off the keyboard parts in a really cool way and psychedelic way. Cool piece of music! Solo6 ends this pretty cool record. This one is a slow long journey again, with some repeated themes and many layers.

If you are a fan of Papir, Neu, Harmonia, then you will for sure enjoy this record as you will already know the guitar playing, production sound, etc.. but not the songs.

http://www.elparaisorecords.com/releases/nicklas-s-rensen-solo
Posted by Scott aka. Dr. Space at 3:38 AM