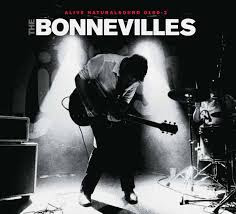 The Bonnevilles (lots of bands with this name) are the duo of Andrew McGibbon Jr. on vocals and guitar and Chris McMullan on drum from the North of Ireland! They are helped out a lot on some tracks with the female backing vocals by Summer and Lily. Michael Mormecha plays some keyboards as well. All the tracks are about 2-3mins in length and you get 13 of them in about 40mins. The opening track, Now Law in Lurgan starts off like an old traditional folk track and then the really nasty distorted guitar and drums kicks in. What a nasty sound, totally distorted.  Anyway, this is a pretty groovy song but damn I miss a cool bass line, just feels empty without it.  My Dark Heart, the opening guitar reminds me a lot of CCR and the guitar is a bit cleaner. The Whiskey Lingers  (hear below) is a slower more bluesy track with some passionate vocals. The Electric Company is a more footstomper and quite short.  The title track is next and the guitar is played a lot like a bass which goes well with the drums. Downtuned and distorted and a bit of slide thrown in as well.  Eggs and Bread is a stripped down acoustic dead row song.  Very short. I dreamt of the Dead is a more upbeat track and features some bass and it really makes a huge difference to give it more punch and groove. Come too far for love to Die (there is also a video for this on you tube) and a slower bluesy track with a slight effect on the vocal and again a quite cool sounding distortion guitar (plus another effect). Erotica Laguna Lurgana is a short instrumental with a very repetitive guitar line and some whistling. The Man with the X shaped Scar on his Cheek tells an interesting story and also has a nice guitar line. Those Little Lies is another acoustic guitar track (with a little kick drum). Learning to Cope kicks in with another high energy one but it ends as it could have really gone somewhere.. Who do I have to kill to get out of Here is the last song and a very emotional track. This is quite cool stuff , and nothing you haven’t heard before, but damn, if they had a full time bass player it would be 50% better as this would beef up the sound, the groove and allow some space for some guitar solos.. I never quite understand these blues, guitar based bands that leave the bass player out.