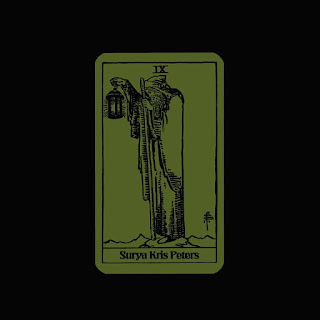 SKP, is a solo project from Christian Peters, guitarist from Samsara Blues Experiment. This is his 2nd/3rd release under this name and features mostly synthesizer based otherworldy music. The material on this very limited CD-R/vinyl (only 100 copies on white vinyl) is mostly taken from his release Moonstruck that was released at the end of last year. Erematage starts things off with some processed drums, a speaking keyboard and some droney synths. It slowly builds up with the vocal like keyboards taking the lead to start but the synths become more intense as it goes. Ragamati starts with a spoke word sample and then organ and a bit of sitar mixed in as well in this really cool slow, spacey raga. Lovely stuff as the dreamy synth takes over and a very basic kick drum/percussion track. There is this strange static like percussion in the right channel which is a bit distracting actually but also interesting. Great track. Winterbottom starts with a simple guitar line and some water sounds before the organ takes the lead in this short track. Snow Feather is a beautiful track and with nice crossing melodies from the guitar, and keys. Lovely.  Side B starts off with Legend of Raja Shakum. This one jumps right out in your face with a very intense keyboard that slowly fades out as the track begins to float away with a sort of mysterious feeling to it. A quite intense keyboard that compliments the organ. Moonstruck Serenade features a lot of lead playing on keys, piano and synth but takes a really cool turn at 2mins until the end. Chandra Luna has this almost like Chinese vocal like sound from one of the keyboards and some really interesting cut aways and changes in the first minute before finding its way. Very cool the way this track sort of pulses at common intervals. Amazing and very creative stuff. The closing track is mostly a solo guitar piece with some spacey sounds in the background.  This deserves a much larger press then 100 copies. A really excellent album.  If you are a fan of Lamp of the Universe, Sounds of new Soma, West Space and Love. You will dig this..


https://www.facebook.com/electricmagicrecords/
Posted by Scott aka. Dr. Space at 3:37 AM