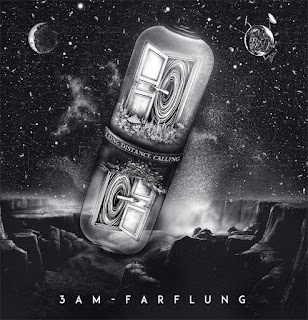 Time for another split lp.. This time with California space rockers, Farflung and the leader of La Ira de Dios (RIP), Chino with his solo act, 3AM. The Farflung side starts things off with Jettisoned into the Rushes….Phase 2. It starts with a synth drone, repeated vocal and then a guitar line slowly works its way in. By the time the repeated vocal line is over you are glad.. it was too long. The drums now kick in and the same delay guitar line is repeated over and over until the bass line joins and then a groove gets going and some synths float over the top and around the soundscape. Now it starts to get strange with some discordant guitar and additional percussion. Pretty strange but then a normal spoken word vocal comes back in and drives the energy up again.  The repeated (Its one day) line returns as the song fades out. Mercere starts with a more energetic drum and bass groove and a load of spaced out sounds come and go as the groove and simple guitar line moves things along. I really miss the lead guitars from the old records as mostly it is just atmospherics, noises and not much rock leads. Lots of cool layers of guitars on this track though. Nice acoustic guitar as well. Petrol for the Crows is also uptempo and tells a strange story with male and female lead vocals as the track is quite spaced in the background.  If you are expecting the intense space rock of Wound in Eternity, that is not this stuff. It is more relaxed spacey music, more melodic, but not very normal. I like that. They still push their art in a cool way.

The 3AM side features 4 tracks, including a reworking of one old La Ira De Dios song and a cover of Willie Dixon and Acidos Acme cover. I found it funny that is says all songs by Chino except… which means only Fire is by Chino as the other three are cover song! Why not just say Fire by Chino and leave the rest of the song credits as is.. I wasted enough of your time.. let’s get to the record. If you have seen Chino’s live set on this last European tour, this material is quite similar. Fire starts things off with a reverberating guitar, drum machine and another guitar line and then the distant vocal comes in and it all slowly gets more intense, the drums get faster, the reverberations, etc... Trippy sounding stuff. Eterna Ascension (La Ira De Dios from the 1st abum) slows things down and there is only the one guitar line to start and then he plays a long guitar solo between vocal parts. Venus is quite slow and really stoned. Hidden Charms (Willie Dixon) is a quite cool version with some more drum machine, slide guitar and spaced out vocals.. If you are a fan, you will dig this stuff as well. One man psych rock. Cool record with a nice insert with some additional information. The silver vinyl edition I have looks really cool as well.
http://farflung.bandcamp.com


http://www.headspinrecords.nl/headspin/
Posted by Scott aka. Dr. Space at 3:35 AM