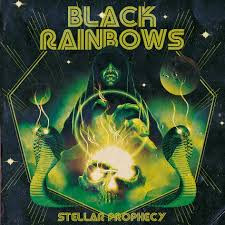 I really love the direction that Black Rainbows have been moving the last few records. The last two studio albums made my top 10 list so I was really looking forward to this one. The Italian trio really nail it again. The album opens up with a pretty straight stoner rocker called Electrify. Woman is a killer slower psychedelic blues track with some nice organ playing (guest Pino!). A really excellent track. Golden Widow is a slow stoney psychedelic journey with a super cool steady groove, laid back vocal (some cool effects as well) and again quite a bit of organ. It slowly grows and features some nice guitar playing as well by Gabriele. This one closes side A and lasts over 10mins. It gets more spaced out at the end with a 2nd guitar solo section and a lot of space sounds. Evil Snake is a short straight up rocker with an instrumental ending. The sound production somehow has changed a bit on this track but my ears don’t like it that much. Dario lays down the bass for the start of It’s Time to Die before the rest of the band kicks into Fu Manchu groove and vocal! They have to throw on track in like this don’t they?? Keep the Secret is a song with some great guitar and a slower stony groove, rippin’ solo and a nice floating and melodic ending. The Travel has space wind, synth sounds, spoken word samples as the Travel slowly grows off the repeated guitar line and vocal. I really like the way this one builds into its final climax. Black rainbows are for sure on a roll and lay out another really solid stoner-space psychedelic rock album and not scared to try a few new ideas out as well. I hope the next record they have an album side long track where they can really take it to the next level.. Great stuff guys..

http://www.heavypsychsounds.com
Posted by Scott aka. Dr. Space at 3:38 AM