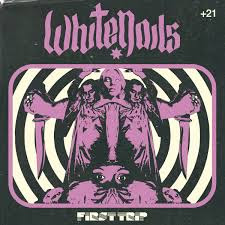 Whitenails are a new French Canadian band from Quebec. This album has been released on LP, CD and cassette and is the bands first release. The band is a 6 piece with two guitars, bass, drums, keys and vocals. This album has taken me weeks to really get into but after having it in the car, I have to say I am really digging this album. The band takes some cool inspiration from Soundgarden and mixes in with the US band, Nova Driver (whom, they probably have not heard) and maybe a dash or Warrior Soul. I have to say this is a really great record. Listen to it below….

http://whitenails.bandcamp.com
http://kozmik-artifactz.com/
Posted by Scott aka. Dr. Space at 1:59 AM