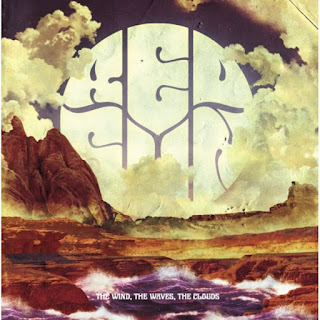 Red Sun, are an Italian band (trio) and this is their third release. They produced a full length record back in 2014 and last year did a split LP with The Luck of Eden Hall. The music is mostly instrumental. Artic Wind starts things off with a mid pace, melodic guitar line, and drony synth underneath. The track picks up speed with a cool phased out guitar riff and then back into the floating space where it began, then another break with a guitar solo, and back again. Very good and dynamic track. Hidden Currents follows with a nice melodic guitar line that is repeated quite a few times with a low mixed synth in the backround as well. The melodies twist and turn and eventually a more heavy riff kicks in but no real solo in this one. The Clouds has a really nice melodic guitar line that drives the track. During the break, a windy synth sound is mixed in to change the atmosphere a bit. Some very cool guitar at the end as it gets quite psychedelic.  Holy Mountains closes out side A and features some spoken words by Fredo the drummer. This is a pretty relaxed track with a nice simple synths solo before the heavy and dramatic guitars take the track to the final crescendo.

The Jagged Coast of Wales, which starts side B, features Cavitos from Da Captain Trips on lead guitar. The opening guitar reminds me a bit of Causa Sui. This is one of the best tracks on the album with great melodies and feelings and of course some cool guitar playing.  Aurora is a mid paced but sort of dreamy piece with some synth drones. The track gets a bit heavier towards the end but keeps its melodic energy. Waves of Sand ends the album.  This is a pretty cool mostly laid back melodic spacey album with some good dynamics, I wish for a bit more guitar solos, as I always do.. Enjoy..