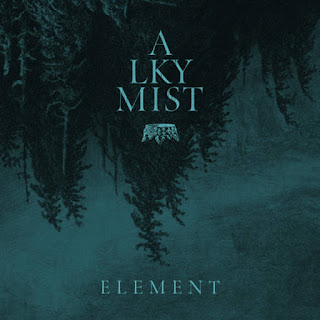 Alkymist is the new band formed out of the ashes of Sumo Sun and the reformed Gas Giant. Kasper (Bass) and Stefan (guitars) from the reformed Gas Giant are joined by Peter (Detest) on vocals and Philip on Drums. This debut EP is released on digital form and also on a very limited edition cassette tape. The material was recorded in the bands rehearsal room. Myling starts things off with a heavy doomy riff followed by a complimenting melodic guitar line and then the spoken word like vocal kicks in. The vocal is very intense, almost like death metal at times powerful. Lots of nice melodies on the guitars mixed with the heavy and inbetween the powerful vocals. After a short solo, we return to the doom. Nice melodic ending to lightening things a bit. Djinn follows and is a 9min track.  This starts with a cool guitar and some intense drumming before it slows and the heavy crushing riff kicks in. The vocal on this track reminds me a bit of Lee Dorian (Cathedral, With the Dead). The mid section mixes things up a bit with some cool guitar and intense drumming and then slows again. Heavy stuff!! Black Egypt is the shortest track at about 6mins and is basically a long and cool intro for the last track. It starts with a long super spacey guitar with lots of cool bass lines. The track is almost over by time it gets doomy. Great instrumental. Paradise is 9 ½ mins and brings back the doom. The vocal starts as a sort of low almost whisper like vocal before the death metal vocal kicks in. At 4mins the track changes mood with a melodic guitar line and returns to the more whispery like vocal. You get a bit of a bass solo as well under Peter’s spoken word, which is not that easy to understand, unless you really focus on hearing it. Brutal heavy stuff. Doom is a difficult genre to stand out these days but this is a very solid release. A bigger label really needs to pick on these guys. If you are fans of older Cathedral you will probably dig this stuff.

https://alkymist.bandcamp.com/releases
https://www.facebook.com/alkymist/
Posted by Scott aka. Dr. Space at 10:37 AM