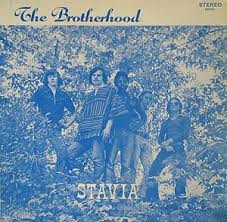 The Brotherhood were an Ohio based band from 1972 that released this one rare press record in like 200 copies. This is the first legit vinyl reissue with a remastered sound (not from the original tapes) and liner notes from one of the members of the band, John Hurd. The album features 9 tracks of early 70s rock with a bit of west coast mixed with funk and soul. The band throws in some nice flute and some nice guitar solos on some of the tracks. The album starts with the Color Line, a funky piece with some nice organ playing and accompanying flute. Rock and Roll Band is a more laid back tune and features a long guitar solo and maintains its slightly funky undertone. Back Door has the organ as the driving instrument and again some flute. For her Time is the most hard rocking track on the album with a heavy guitar riff but also a flute to sort of throw you off a bit. Nice guitar solo but sadly the track fades out as they start to jam. Meditation Part 1 is an instrumental piano based track with complementing flute. Uncle is one of the weaker tracks on the album but features 3 of the band members harmonizing on vocals and is quite laid back with a QSM vibe to me but without the killer guitar or vocals. Cry of Love is a more mellow track with some nice playing and passionate singing. Tragedy lets the organ and flute lead in a passionate track about black and white people being together. A bit funky. Meditation Part 2 finishes the album off with a laid back love song. One of the weaker ones and not really a great way to end the album, despite the very nice guitar solo.

While the liner notes say Acid Rock and Hippie Psych, this is not a psychedelic record at all and besides 1 guitar solo, I would never describe this as acid rock. IT is a smooth soulful, funky rock and roll record with some great tracks. Nice album but a bit overhyped.