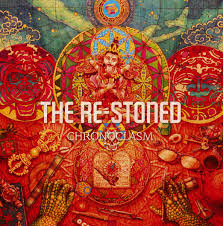 The Moscow based band, The Re-stoned are back with their 9th release. I have only heard the ones that have been released on vinyl but this is a well evolving band. The leader, guitarist, Ilya also plays in Maat lander and other projects as well. Side A starts off with The Sirens of Titan with some great stoner rock riffs and some cool guitar solos before going off into a more dreamy part with a sort keyboard like sounding guitar and this is how the jam ends going into Human without body which kicks in with some nice slide guitar work. Eventually, the track turns into a bit more doomy riffing before the return of the slide for the solo section. Amazing guitar solo and a cool use of effects pedals. Ilya is a master. Save me under the Emerald Grass has some beautiful melodies and nice acoustic guitar work to start. Side B starts with the Psychedelic Soya BBQ and another cool slide guitar work out but mixed with some cool effects and a sort of laid back bluesy feel. Great track. OC44 brings back the rocking and killer guitar to start and then the acoustic guitar is layered in as well to nice effect and beauty. Then the classic HM riff kicks in again. The title track, Chronoclasm closes out this album. This one starts with a very interesting guitar riff and sound and also some layers of slide once again. These themes repeat over and over a few times and then a new twist is introduced and off they go….. The 2nd side of the record seems to have a bit more multilayer guitars going on. Anyway, I love this record and have been spinning it a lot.. Great band.