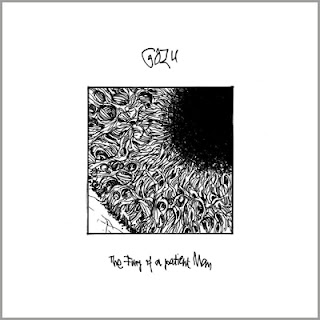 10 tracks 62mins of intensity from Boston.. Sometimes rock and roll like Signed Epstein’s Mom, stoner rock (Bald Bull), metallic riff rock (Charles Bronson Pinchot), QOTSA like tracks but with heavier guitar (Irish Dart Fight, Salty Thumb), slower heavy stuff (Disco Related Injury), etc… Traci Lords is a slower moving moody piece with an intense ending. Ghost Wipe has a very powerful guitar riff but slides into the melodic side when the singing comes in, not the aggressive. I have to say that the singer Marc writes some excellent lyrics on this record. Snake Plissken is totally different than most of the other track. The vocal is sung mostly with a totally different feeling until they decide for a mainstream like chorus. Almost punky. The band save their best song for last with the Ceaseless thunder of Surf! What a super cool 24min song with a mixture of all the things these guys do good, but with an experimental improvised feel. There are still nearly no guitar solos of any significant length on the entire record (until this last track) which I think is a bit strange. Got two guitars? Check these guys out..

http://www.smallstone.com http://www.reverbnation.com/gozu666
Posted by Scott aka. Dr. Space at 2:21 AM