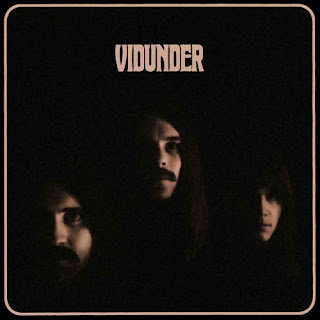 Vidunder is a pretty new Swedish hard rock trio from Malmö. The band released their debut 7” on Crusher Records last year. Summoning the Not Living is a great opening track with a more intense vocal. Into the Grave (features John Hoyles on lead guitar from Witchcraft/Troubled Hourse) and Trees are nearly Graveyard cover songs as they play so close to the style, it is almost a crime, I would say. Trees mixes things up with a bit of organ but so did the last Graveyard record. Threefold now sounds nearly just like Witchcraft but not as organic in this ballad track. Försummad och Bortglömd is sung in Swedish and has two nice guitar solo sections. Asmodeus, the track from their debut single in Nov 2011 is next and is an ok song but it just did not grab me on the single or here. Beware of the Moon is a slower, heavier track featuring the organ. It still annoys me that the singer, rather than trying to sing in a unique way tries just too hard to emulate sounding like Magnus from Witchcraft. This will only hold the band back, not bring them forward. Do your own thing, guys. Fire again is a slower track and quite short, under 3mins. Threat from the Underground speeds things up again and reminds me of the opening track. Your Ghost ends this short record with another Witchcraft inspired track. (10 tracks, 34mins). The band is trying a bit too hard to sound like their fellow Swedes in Witchcraft and Graveyard at times. If your favourite bands are in this genre, then check these guys out as they do have some great songs.

http://www.crusherrecords.com http://www.vidunderband.com
Posted by Scott aka. Dr. Space at 1:56 AM