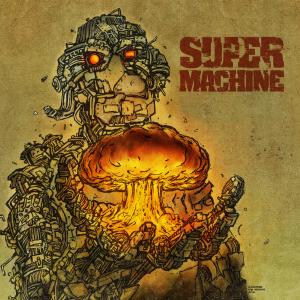 I have never heard of this band. They are a four piece from New Hampshire and two of the guys played in Scissorfight. This record has 11 tracks in 41 mins. The opening track, Solution is pretty tuned down heavy riffing stuff with a great wah guitar at times. David Nebbia, the lead vocalist has a pretty distinct voice and they add some effects on it sometimes. Broken has another pretty massive riff and this track has a more melodic sound like Alice in Chains or Soundgarden. The solo section is quite bluesy and different, which I really liked. On the next track, Transformer, Jay, kicks down another cool catchy and heavy guitar riff. MT is another melodic track that could be like Soundgarden, even Nirvana with the way the vocal is sung. Josey Wales is a more bluesy track but Jay shifts back and forth between this bluesy feel and his signature heavy riff which is used in many songs. Flesh Farm reminds me of Soundgarden at least the beginning of the track. The end is a bit different. Think 1990 Soundgarden. David is not singing in that kind of range but he has a cool voice. I dig it. Buffalo combines a more bluesy thread with the “std heavy riff” and a cool vocal. It really picks up speed towards the end but they don’t jam it out at all. Pill Cruise has one of the more aggressive riffs if not the most on the record but then it goes somewhere else. Crutch, Jay has this really cool effect on his guitar. Heavy Bullet is one of the more bluesy 70s style tracks on the record. Warlord ends this album. I think you have an idea of what these guys sound like now. This is very inspired by the Grunge era bands but with a more stoner rock guitar riff and sound and throw in a little blues. Good singer.