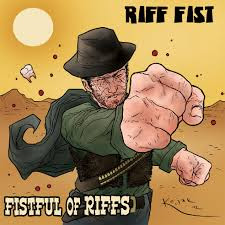 Riff Fist is a new Australian stoner rock band featuring Cozza (bass and vocals) whom I had met at Roadburn Festival a few times and he does a cool radio show in Australia as well. Anyway, this CD has 4 songs in 23mins of straight up ass kicking stoner comedy rock and roll. Spud King starts things off, a song about potatoes and hash! Might remind some people of the heavier side of Clutch. Fingerless Ben has a more phased out guitar part at times and is a bit more psychedelic and has a slower doomy section before picking up the pace at the end again. Like the band’s name suggests the band is into the riff, as there are not a lot of guitar solos but Casey sneaks in a few. Riff Stew is next short but monster track. Ride the Pony ends this EP and it starts off with a bass line before a spacey guitar slowly comes in as Grondo and Cozza lay down the groove. Just at a minute the main riff kicks in hard. The song is sung a bit in the way early Monster Magnet is sung. Long rocking track at 8mins. This is a really cool EP and if dig Clutch, Monster Magnet, WO fat, then check these guys out….