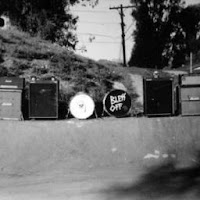 ZigZags play a very uptempo aggressive fuzz rocker called Runaway. Sung with a punk rock mentality and driven by a heavy nasty guitar sound. Cool track and short song. The Shrine came and played a bunch of gigs in Copenhagen last year and everyone raved about them but I missed them all. Their track is called Spit in my Life.  It starts with a spoken word diatribe before they turn on the rock! Quite raw, nasty rock and roll.. straight up, no fucking around worrying about song arrangements, just let it roar…..