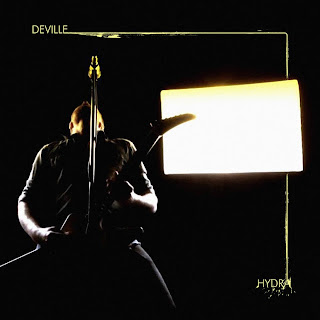 Deville are a Swedish Stoner rock band that are keeping 90s stoner rock alive, well and true to its roots. 11 tracks in 45mins.. Lava kicks in fast and will remind people of Unida and Kyuss but without the intense low end. A fast one to start off. Iron Fed is another fast paced one. I really like the sort of ominous thread that runs through the guitar in the non-singing parts. In Vain slows things down and has a pretty catchy swing to it. The Knife has a more intense guitar line and punch to it. The end instrumental section is quite melodic but really lacking for a guitar solo. Now to think of it, there might not have been any guitar solos yet despite the band having two guitar players. Over the Edge is a classic stoner riff and this track does have a 10 second guitar solo but mostly just heavy riffing. Powerful track. Burning Towers slows things down but keeps it heavy in this great track. let it Go is a more melodic uptempo track. Battles will be Born has a slow almost heavy metal riff that slowly builds up in this short instrumental track. It really could have built into a monster but they ended it and did not evolve it much considering how cool the track is. Strange.. Blood Crown comes back to the fast and furious but a very melodic and quite mainstream feel to the vocals. Riff is still hard edged. Imperial is another more melodic track with a heavy riff and a short ripping solo. Stay a little Longer is the closing track and one of the longest. This is a pretty cool record. I think the band are sounding more like fellow Swedes Mustasch in someways, who are very popular these days. It is a more mainstream sound in someway but they still have some great powerful songs that I really like.