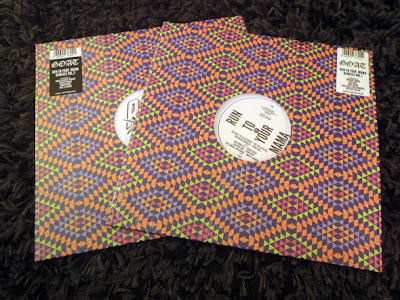 GOAT, the now famous underground phenomenon from Sweden, have allowed the following artists to remix on track from their cool debut LP. The artists are: Thought Forms, High Wolf, Redg Weeks, Tom Furse, Teeth of the Sea, GNOD and Raikes Parade, Cherrystones, Hookworms, Cage and Aviary. I originally thought this was going to be remixes of a lot of different tracks but everyone is remixing the same track, Run to your Mama now. Many are totally far out quite crazy while some have thrust in quite a cool groove, others have played more with the vocals,etc.. Teeth of the Sea does the coolest remix on the Volume 1. Sticking with GNOD’s recent drone music their version reflects that with turning the track into a drone thing with just occasional use of the vocal in different echoed versions. Cherrystones version is totally deconstructed into something nearly unrecognizable. Hookworms has some guitar and has made the track into a more floating spaced out piece. This is the best version by far. Cage and Aviary turn it into some sort of almost techno track. Bizzare. Anyway, none of them sound much like each other but it still would have been much cooler if more different tracks from the LP were remixed. If you really dig the band you might want to check this out but like the Wooden Shjips remix record, this is only for real psych heads. These are pretty limited to a few hundred copies on orange vinyl.
http://www.rocketrecordings.co.uk
Posted by Scott aka. Dr. Space at 2:16 AM