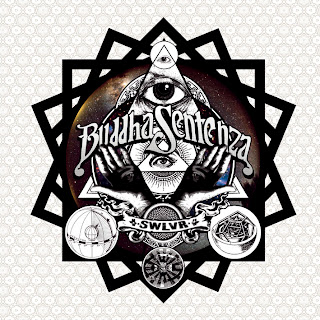 I quite liked the bands previous release (Mode 0909) and I was quite surprised when this one came through the mail slot. The five piece band plays instrumental music and hail from Heidelberg, Germany. The CD is split into 14 tracks (46min) but there are really just 7 real tracks and 7 strange spacey interlude tracks that are given 3-5 symbol characters. Time Wave Zero starts things off with a pretty fast pace and then slows down with the Hammond appearing before they take it up again. No guitar solos in this track, just some heavy riffing. Arrested Development starts heavy but then the organ and guitars play a more psychedelic role as the track takes a slow more stoned groove. Then piano for a short interlude before the pace really picks up and then back and into a lead guitar section. Spanish Revenge starts quite frantic before settling down a bit into one of the more melodic and longer tracks at nearly 8mins. Later the track gets heavier and features a cool synthesizer solo. Debris Moon (8:45) is a slow and spacey track with some really deep bass. Great floating ambience. The Monkey stealing the Peaches (cool title!) is the shortest of the main tracks at only 3 mins but is lead by a really cool guitar line. Tzameti is a fast paced track with some cool lead guitar and organ interactions. The CD ends with Psychonaut. Another more spaced out track like Debris Moon. This is a damn cool record with a lot of moods and changes and comes across as quite jamming and free flowing and not all super highly composed, which is nice. Sounds great if you crank it up!

http://www.worldinsound.com http://www.buddhasentenza.de/#news
Posted by Scott aka. Dr. Space at 2:06 AM