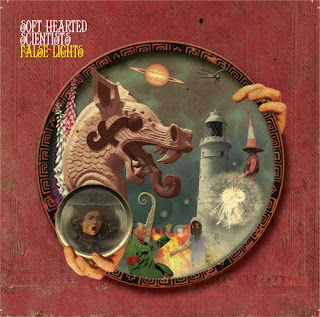 First off, this is the first CD release I have heard of from this awesome label. This UK band recently released a super cool compilation record of material from most of their releases and now this is all new studio material, including 14 tracks. Psychedelic pop music inspired by bands from the 60s primarily. After a small intro you go straight into the first track Seeing. I like the song but the chorus is repeated far too many times, perhaps 100. The title track is a bit Syd Barrett like but more lush sound both beautiful and floating at times. I love the rhythm on Songs from the River, really nice instrumentation that surprises and makes you smile. Turn the Tables is an acoustic track which sounds normal on the surface but has a lot of interesting stuff happening in the background and you can’t help but think of the Beatles in someway. Flip the record for Seaside and the Giant Sound. It starts with drums and a jew’s harp and then the other instruments kick in (do I hear a banjo?). It gets quite bubbly at the end. You have to love these wonderful lyrics they sing on this entire record. Halloween People has some nice dualing acoustic guitars in this short track. Trees in the Wind, reminds me of a Pink Floyd song I can’t recall at the moment.. One from Meddle, I believe. The Monsters of ID has this very rhythmic singing that additional singing is layered on top and lots of other stuff is happening in this psychedelic soundscape. Panorama is the last track before the outro and the longest on the record at 7 mins. It is one of the few songs to feature an electric guitar solo and in fact quite a few instruments surface and disappear to play cool parts as the vocals slowly disappears as the track evolves, twists and turns. Lovely album. I wonder if there are any scientists in the band??