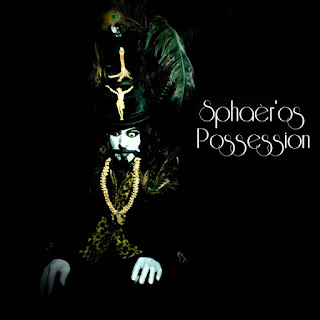 Lovers of primal, pulsing, ritualistic psychedelic head music are in for a treat here. Sphaėros who has fronted many carnations of Aqua Nebula Oscillator since 2000 is back with this multi-tentacled art project that combines music, film and performance. Sphaėros says: " I’ve created seven music pieces and seven films, born from spheres, without a preconceived form, created spontaneously like automatic writing, to let the spirits speak. This work is made up of a superposition of successive layers of sound, visions, poetry, and colours. When linked together, these elements create a unique living kaleidoscopic universe that blends seeing, hearing, and spiritual thinking into the Beyond and its parallel worlds.

"To create this piece, I spent three years in my inner world, living an almost monastic life in order to find the very essence of creation, and to share my vision of magic and reality as openly as possible, without any concession. While this is a personal project, some friends helped along the way with vocals, dancing, arrangements, drums."

Sphaėros is a unique musician, artist, performer and presence in an era where the term "psychedelic" is used as a classification of what would once have been viewed as alt-rock. His is a world moulded by Syd Barrett, Hawkwind and Guru Guru He is truly psychedelic.

So that is what the promo material has to say.  The album contains 7 tracks and starts with Lucifero. This features both male and female spoken words over the top of a nice psychedelic music with lots of layers of instruments and a slightly eastern feel to the main guitar (or other string instrument, Oud?).  The music becomes mostly drone and the guitar at the end. Possession is next to take you to the next step on this musical journey and starts with a vocal sample of a serial killer before the bass synth sequence and drums drive the track. A very special sound on this track with this fuzzed out bass sequence mixed up front. Lots of psychedelic stuff flying around the room. A lead synthesizer later becomes the main instrument. A spoken word in French comes in at the end. Sorceire has some really strange sounds gurgling about and ghost voices while the main instrument is a farfisa like organ with drums.  Trippy.. Vibration keeps the vibe tense with some wild drums and keyboards, very free jazz inspired while the bass line is stready and the organ just does it’s own thing.  Then the LION roars and later a woman is having an orgasm. Intense track. Void starts with a synth sequence and is a bit dreamy. A highly effected voice comes in after a minute or so as the tension starts to build and the drums enter. This is a short intense one. Oeil starts with an organ and some spoken words (in French), and howling. A bit of guitar is going on in the background as well. A male vocal comes in and some one is being killed in the background (it seems) or having sex!  Not much new in this track, sort of a lot of the same ideas used in the other tracks by this point in the album. Ange de Luminere ends you psychedelic adventure.  If you are a fan already of Aqua Nebula Oscillator, then you will probably enjoy this a lot.