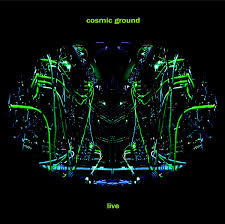 Cosmic Ground is a duo project featuring Sunhair (Horst) on synthesziers and Dirk (Electric Orange) on sequencers, modular synth and other synths. Good old analog gear!  This is a live album record at two different festivals in 2016 (E-Live Festival, Oirschot and the Psychedelic Network in Würzburg). It was mixed and produced by Dirk. The opening track is very much like 70s Tangerine Dream stuff with many of the tracks having a main synth sequencer line that they then both play and add layers of synths on the top. Cairo Grind (see below) has a few minutes of space before the repeated synth kicks in and it is a bit more like a drum beat, nearly to start and then becomes more synth like as the energy grows. A bit of a dark feeling on this track. Unground I is very spacey track.  I hope they had some nice visuals to go along with this…  Underground II is more than just a break in the track. Also very spaced out and floating but some beautiful melodies in it as well. If you get the digital download you get an extra track called Anomaly.  If you are a fan of this sort of music, they do it really well and this is a great performance.  Do they create something new and unheard of before, not really, stick to pretty established routines but they do it fucking good!!