Jambattista- Seeking the Seeker (Self Released) 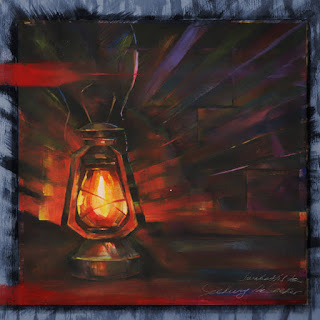 I have never heard of this Moscow duo but this is their first full-length release.  They released an EP in 2018. They describe themselves as heavy psych.  The album starts with Die Todten Reiten Schnell, a sort of intro track that gets quite heavy and doomy as it progresses but then the tempo and intensity picks up. Walker changes the vibe totally with a nice melodic guitar line, with some supporting synths before the music becomes more heavy and the guitar more distorted. Later the vocal kicks in with a bit of effects on it.  Three Crowns Nine Tongues has this mysterious feel and I love the build on this one. Quite psychedelic and moody at times. Seeking the Seeker again features some singing again on this slow building track. Cool… Red and Gold is my fav track as I love the guitar parts and vibe on this one a lot with dark mystery and spacey feel. Fields within Fields without follows with some nice change of ambience as the keyboards change the mood from heavy and dark, although the mysterious feel is maintained as it slowly builds and the guitar line gets a bit mutated. This could be something Motorpsycho might have recorded. ToY-J! is next and something totally different and a bit more riff rock like with a few vocals here and there but then it morphs into a hypnotic track with some psychelelic layers of synth added to the mix. Very cool. The Strangler finished this debut off with a bit of all the element of what makes this an interesting mostly instrumental album of psychedelic music with a heavy doomy edge at times.

Someone like Svart or Bilocation should jump on releasing this. I was quite impressed. The best non-signed band I have heard in a while.