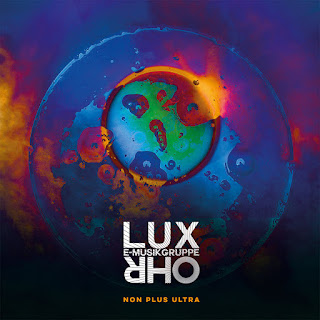 This is a group I discovered after seeing them at Roadburn. I have some of their releases and was very happy to get this promo CD for the new one that is out soon.  The group is a trio featuring the following members and denoting the tracks they wrote: Ismo Virta (tracks: B1,A2), Jaakko Penttinen (tracks: C1,C2,D2), Pertti Grönholm.

This release is a double LP and features 8 edited tracks. Not sure if the full length versions will be available later, perhaps on a double CD version or not? Anyway, each side features 2 tracks and this starts off with De Suche nach dem Horizont (all the titles are in German). IT starts with a nice sequencer rhythm and a sparse keyboard line that sounds a bit like guitar. It becomes clear later it is a guitar. Very melodic and I love the way it cuts through the track.  Bahnhof 77 has an aggressive space synth sound to start things off and slowly a new sequencer line bubbles up from underneath as this slowly fades down to near silence at 90 seconds. There is a totally different vibe on this track with the addition of mellotron. Very TD like. Die Ewige Wanderer starts with some guitar and dreamy keyboards. Later the melotron returns with some nice voice like parts. A bit of hand drums is added as well. Love this track. Aus dem Kollaps Geboren starts with what sounds like a flute and some birds in the garden of paradise!! Very dreamy. IT eventually features a drum kit and Ozrics like delay guitars and has a sort of ominous feeling to it. Hypnogenesis III starts off with a drone that is almost like an airplane. Very dreamy and at 3 and half minutes the mellotron really changes the mood a lot. Love the way these guys layer stuff together. This track features one of the few lead synths solos. Nice use of the wheel!! It is later followed by a short guitar solo. Some nice trading back and forth.  Traumraum is the shortest track on the album at just under 6 mins. It is very laid back and dreamy and all about the way the three synths intersect. Der Doppelgänger starts with a repeated synth but then continues like many of the other tracks. There are two trading lead like synth lines on this track though. Die Vergangene Zufunft ends this album with 12mins of pure spaced out stuff.

Most of the tracks from the album are up on you tube now! Check it out if you like old school berlin Tangerine Dream ambient electronic music. Great stuff..