Dubbal- The Return of the Lonesome Traveller (Self Released) 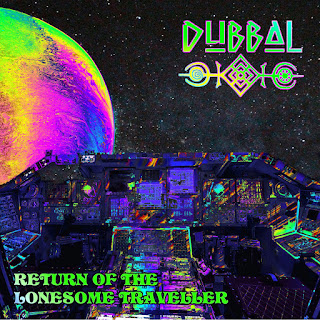 Dubbal is a UK space rock band lead by Kev (Doctor Brown and many other acts). The band on this release is:  Kev Ellis -Vocals , Andy Radburn - Synths , Alan Shaw – Bass, Nick May - Lead Guitar and Grunty - Rhythm Guitar.  I think this is the 3rd release by the band with Dubbal I and live at Kozfest being the first two. The release starts with a long space in that would fit right in with GONG before the guitars and very spaced out vocals enter into the picture. The drums are very thin in sound and besides the vocals, the rest of the band is way out in space as is the whole track. This track leads into Fly on In changes the vibe totally with some reggae mixed with space rock!!  The drums and bass sound much better on this track. Bring me the head of….. starts with some acoustic guitar but becomes a classic UK space rock track with all the elements- powerful drive and guitars, spaced out synths and good lead vocals and catchy lyrics. I really like the story told in this track. A Hawkwind influence is very apparent but nothing wrong with that!!! The title track ends this record. It starts quite dreamy and spaced and then the drums kick in and the tempo increases and off we go!!!!!  The bass line is really cool on this track.  I enjoyed this quite a lot but the sound production and mix could have been better for my ears.

This album is also released on a limited CD-R via the band web site below. The album is released on Feb 29th 2020.