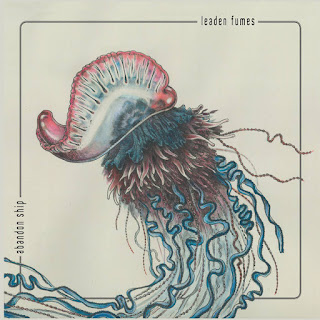 Leaden Fumes is the new band formed by Chris from the Swiss band, Phased.  As in Phased he handles the lyrics and vocals but has switched from guitar to bass in this band.  The band play a more dirty, raw DOOM compared to Phased with bands like the Melvins and St. Vitus, a strong influence. Abandon Ship is a slow, really doomy song with some interesting bass effects in the mid section. The end really picks up in tempo with some cool spaced out effects. (Let Burn the) Temple Within starts with a sample from a movie and then slowly crawls out of the depths of hell.  Classic DOOM sound with some samples and an intense vocal is what you get. Ruthless, is a pretty brutal track but mid paced and not as slow as the others but still angry and intense with a bit of a guitar solo. Side B starts with Asphyxia. A great riff and opening sequence before the track comes down and the vocals kick in. It includes some samples at the end of the track about Asphyxiation and orgasm! Chromophobia also has a super heavy dirty riff. Doomy stuff. The Bleeding Cavity you can see the video below. Craving ends this record of dark, disturbing, intense doom.

This is one of those albums that you might not get knocked out the first time but it really grows on you!!

http://www.leadenfumes.com
https://leadenfumes.bandcamp.com/
Posted by Scott aka. Dr. Space at 4:09 AM