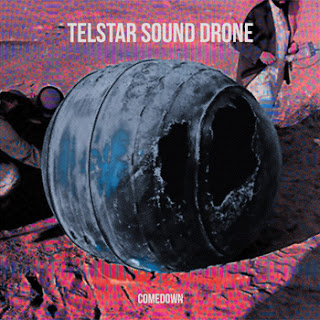 The Telestar Sound Drone started in Copenhagen in 2007 but really got there start when they played Roskilde Festival in 2009 and Bad Afro released the first 7” in 2011. The main guys in this band have also been spending their time as the backing band in Baby Woodrose the last few years. Anyway, this is about their cool psychedelic rock record. 7 songs in 34mins and released only on vinyl and digital download (besides a few promo CDs). The CD starts off with Through the back of your Head. This track starts quite slow and has a pretty spaced out vocal as the layers of sounds slowly creep into the back of your head. Very psychedelic panning mix and a hypnotic groove. Satellited the sound changes and the vocals have some cool effects again that make it really psychedelic. The guitar line is very 60s inspired and it gets pretty psyched out at the end. Feels like a Ride is the longest track at nearly 7 mins and it starts off really spacey (like old F/I or Farflung) and this one is just a long floating spaced out trip. Now see How brings in some acoustic guitar and reminds me of very early Hawkwind. Evaporation picks up the pace but does not lessen the psychedelic effect of the music. Lost our Love has a darker more sinister feeling and the vibrating guitar line really makes it quite psychedelic. Cabin Fever ends this record. Another slower really spacey and psychedelic track.  For fans of Wooden Shjips you will find some similarity in the at times but no organ, just spaced out guitars. Also, a band like Spiritualized is an influence. Cool band and good live as well but not as psychedelic or spaced out as the record. I was really surprised. I would like to see them at Roadburn next year..