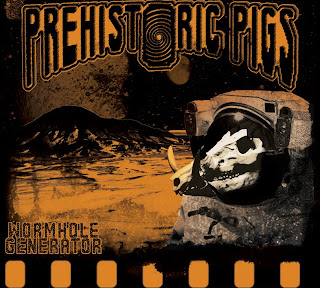 Yet, another new Italian band I have never heard of. Prehistoric Pigs are a three piece and play heavy instrumental music with a spaced out edge to it. The opening track, Swirling rings of Saturn gives you a good feel for the entire record.  After a space start, the heavy stoner rock riff kicks in and the band keep their heads down and just pummel you with minimal variation as they try to make you feel comfortable with their sound. As the last minutes approach the guitar shifts to a space trippy sound and then back into the riff. XXI Century Riots is nearly 9 mins and starts spacey and then has a slow stoned doomy riff with a bit of a nasty sound that slowly takes hold. It does not take the band long before a Kyuss like bass line drives the track but not for too long before they return to the more doomy sound. When the Kyuss section later returns they add some psychedelic samples. Tafassaset starts with some strange samples of something in water and just bass and then the cool space wah guitar takes the lead. Interstellar Gunrunner is a fast paced stoner track. primordial Magma starts with the sounds of like something exploding or collapsing. Anyway, this song has a great melodic riff but I know I have heard it somewhere else before but where? Entelodonts is about dinosaurs.. heavy stuff…Electric Dunes is a 13min track with a cool slow spacey start but lots of heavy riffs now and then and back and forth with some cool samples and spacey parts as well. Cool album.

http://www.moonlightstudios.it/recording/
Posted by Scott aka. Dr. Space at 12:07 PM