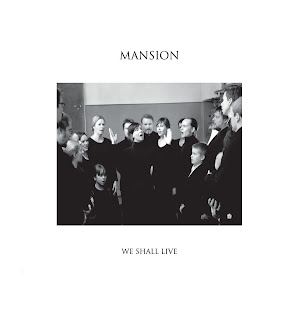 Mansion is a mysterious release from Finland. The band name refers to the Finnsh Christian apocalyptic Masonite cult, Kartonoism, which existed from the 1920-50s in Finland and was led by Alma Kartano. The band is a five piece playing music like early 80s NWOBHM but with cool female vocals. Each side of the record plays on 45rpm and features 2 tracks. Mother’s Burden starts very slow and peaceful but then the mood changes when the heavy guitars and like choir keyboard kicks in. Alma has a special voice that commands your attention. Powerful and emotional in music and lyrics. We Shall Live, the title track is more organ driven and has a cool groove and sort of just sucks you into the mystic vibe of this band.
Flip the record over now and Sorrowless starts with some cool female like choir vocals with some delays as the bands slowly works it way up and then the track kicks in. IT has a similar vibe to the untempo rock of the first side. Somber Sermon ends the side and this is the best track as it gets more and more intense and a bit doomy at times. Some might compare them to Seremonia but I don’t think they have much in common besides a female vocalist. Very cool Ep. I can’t wait to hear a full length.

http://www.weshalllive.bandcamp.com
Posted by Scott aka. Dr. Space at 9:35 AM