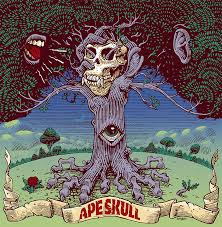 The very cool label, Heavy Psych Records is back with another cool band. The CD comes in a very cool slip sleeve with great artwork. You get 9 tracks in 45mins of solid rock and roll sounds. Lazy is a great opening track and some nice guitar work by Fulvio. The lead vocals are done by drummer Giuliano. So Deep continues with a nice melodic track and so nice soloing one again and it even has a short drum solo!  Time and Wind slows things down and allows Pierpaolo on the bass to shine a bit. This track is nearly like something you would hear a southern rock band record. Make me Free has a great funky wah guitar riff that starts the track off and might remind you a bit of Hendrix! I got no time is a cover of a German band called Orange Peel. This is another really funky track. It surprises me that they put to funk rock tracks in a row? Both were cool. The later has a great solo! Bluesy, is just like the title says a more bluesy vibe but also a hard hitting riff at times and a lot of different changes. Hookah is more of a late 60s track with a simple riff and melody but great when it kicks into the wah solo section. Now I get You is a short 3½min sort of shuffle track. Take me Back closes the record. If you like melodic hard rock with some great guitar solos and songs, then check these guys out!