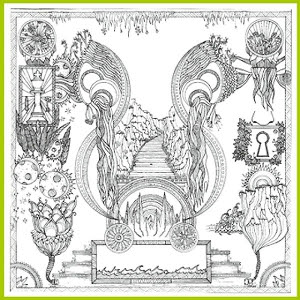 This is a new Italian band, is more like an instrumental jam project and I am not at all sure who is playing on the release. I think it the people from Void Vibration and Insider?  If you like those bands you will also like this stuff. The opening jam called Leaving the Mainland Again, is 10½ mins long with bass, drums, guitar and synthesizer. It mainly switches back and forth between some nice guitar sections and this drone synth before the riff changes totally at 3½ mins. The end section really picks up the pace and rocks out. Morfolk has a really cool driving bass line and spacey guitar and synth to start and then a more uptempo track takes off lead by some cool guitar throughout this track. Sargassian Way To Definitive Blue is a more melodic track with some great guitar playing that just floats and glides.  The synth lines are nearly the same on all the tracks so far but just focus on the guitar! Track 4 is more floating and spacey I like the lead guitar line that slowly takes hold and drives the track. Floating is a slower 5min track with some nice elements and the synths play a more important role as the track, floats. A nice sitar guitar part comes in later. Old man from the Sea starts with a keyboard that is almost like a melodica and the guitar slowly builds up the track. It is much more repetitive than the other track especially at the end. Siren’s Call ends this instrumental rock record in a strange way with a piece unlike all the rest. Cool record. Available as a CD in only 300 handmade and hand numbered copies or a limited edition vinyl version.