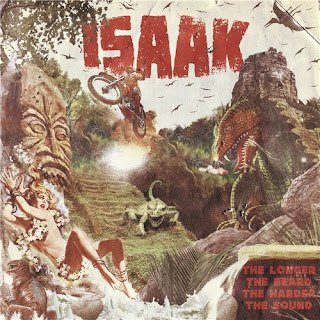 I have never heard about this four piece (vocal, bass, drums, guitar) Italian band but damn, this CD has some great songs. This was released in 2012 but in Italy but this new remixed version also contains 4 extra tracks including covers of Pink Floyd and Iron Maiden! The CD booklet is really cool with lots of cool like 60-70’s movies like graphics. Anyway, the record starts with Haywire. It is a high energy track with a special sound production. Classic stoner rock riff rock on this opening track. Under Siege starts with a monster fuzzed phased guitar before the high energy stoner rock but with a slightly spacey edge. Sounds like Dozer. Breaking balance is a bit longer (4mins!) and starts quite spacey but slowly builds up into a hell of a rocker with a great groove and cool guitar. Flood is 8 mins long and starts slowly and about 3mins the heavy riff kicks in and the track maintains a higher energy for most. It is pity there is so little lead guitar on any of these tracks so far.. mainly just the heavy riffs and some spaced out stuff but not real jamming electric lead guitar. This track is very cool and spaced out though. Psychedelic. Red (The Colour of God) is a quite fast paced track with loud drums and intense guitar. Rest of the Sun is also heads down, stoner rocking headbanging stuff with a cool groove. Adrift is another uptempo one much like the others but Hypotesis is a droney track but with mid-paced drums and sitar that really gets powerful when the sitar drops out towards the end. Two cover songs, Fearless by Pink Floyd and Wrathchild by Iron Maiden split in next. The former is a heavy riffing version but all the beauty that the track had is stripped away, while they manage to make a pretty cool stoner version of Wrathchild and it contains a pretty cool guitar solo so I don’t understand while they are so rare on the rest of the record? The Right Time is a new song and a fast rocker. Isolation 2.0 has a more metal riff but still is pretty grooving. I am sure this band kicks some ass live.. Enjoy.

http://www.smallstone.com https://www.facebook.com/isaakband
Posted by Scott aka. Dr. Space at 11:01 AM