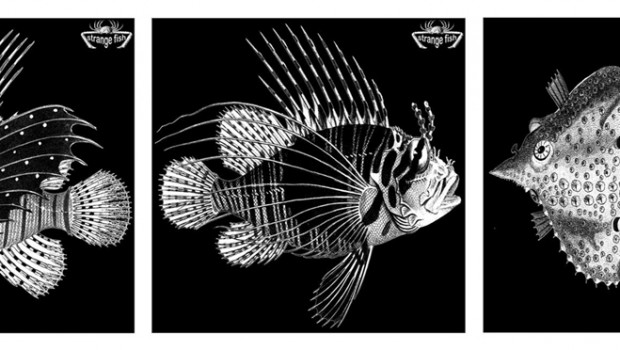 Strange Fish is a series of instrumental compilation records that includes two 12” records, two double albums plus a CD of bonus material for those who purchase all the records. Strange Fish One on side A features US artist, Craig Padilla. Craig is using old school analog synths like the ARP2600 (I would love to own one of these!) and other old ARP synths to create Klaus Schultze like trips. Full Moon World is an older track from 2005 while Secret Language was recorded in 2010. Flip the record over and you get an amazingly cool song from the Welsh band, Sendelica called Strange Fish!  It is not guitar oriented but more ambient for this band. Strange Fish 2 is a double vinyl and features more krautrock, prog rock stuff and quite a few of the familiar bands from this label like Vespero, Sendelica, the Grand Astoria, Temple Music Moonweevil as well as some FdM virgins, Julie’s Haircut (Italy), Organic is Orgasmic (Russia), and Mechanik (Spain). Pretty damn cool stuff.

Strange Fish 3, is mainly kraut-electronic trips, features many of the bands that were on the excellent “Head Music” compilation including Earthling Society (performing a long suite called The Vampire’s Kiss), Vert:x (3 tracks), Black Tempest, Palace of Swords (2 tracks), the Golden Cake Company (Welsh analog synth improvisers) and finally the debut recordings of Dead Pylons (featuring folks from Hi-Fiction Science). This is more relaxed and spaced in general but I put this one on Sunday mornings...

Strange Fish Four, is featuring acoustic guitar and synth excursions with a more ambient music flavour. It features 7 different artists from several bands that have been on Fruits de Mer releases in the past including James McKeown (HI Fiction Science), Vox Humana (Dylan Lane from Soft Hearted Scientists), Organic is Orgasmic (Kamille Sharpadinov of The Grand Astoria), plus Temple Music, Cat Frequency and the Bordellos. Some of this stuff is really psychedelic, wow..
And if you buy all four, which I think are really cool, you will get a bonus CD with a lot of people you will know if you are familiar with this label and it’s output including exclusive material by the great and creative Jay Tausing, The Cream People, Mademoiselle Marquee, Oceanfire, Purple Rock Trip (very cool track), Beau, Amazing sounds of DB Turi, Elevation (recorded in 1999 on the night of the millennium), and the Golden Cake Company. I agree with the promo material, that while these bands made some really cool tracks they don’t really fit with the themes of these amazing releases… I am damn impressed with these and have been spinning them a lot lately. Super cool new stuff for an very impressive label. Remember, vinyl and a rare cd only release by this label. No digital formats otherwise..

http://www.fruitsdemerrecords.com
Posted by Scott aka. Dr. Space at 12:17 PM