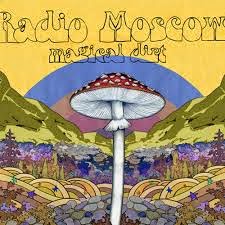 Radio Moscow is back and this is the first full length record with the new line up (the rhythm section left for Sweden and joined Blues Pills). Let’s just say that Parker has a lot of energy still left in his blues soul to spill out into a hard rocking psychedelic blues rock record. I was a little disappointed that both tracks form the Volcom records 7” appear here (Rancho Tehama Airport and Sweet Lil Thing) and not more new music but damn, they are both great songs. The record has a slightly less raw sound production than the last album, which is fine. There are still lots of panning guitars and some effects to make quite an intense psychedelic experience.  So Alone starts things off with a killer riff and groove and solo before the vocals kick in. The track ends with an amazing psychedelic guitar solo with cool panning and effects.  Rancho Tehmama Airport (from the 7”) is a bit slower at times and more melodic but still some mean ass guitar parts and riffs. Death of A Queen like So Alone starts off with a cool fucking jam before the real song takes over. This is a really awesome Jimi Hendrix inspired track with a great guitar solo with some cool effects. The entire band rocks! Sweet Lil’ Thing (from the 7”) is an acoustic track but still down and dirty sound, slide and vocals. These Days takes the energy level back up and another cool riff and groove kicks in. It is cool how for each song he tries out a different effect pedal and sound. Now flip the vinyl over and Bridges kicks in with a cool wah guitar riff with a mid pace. This track has some double tracked guitars making it quite psychedelic leading into the acoustic guitar section and then he plays some lead guitar over the top. Damn cool song. Gypsy fast Woman Parker adds an effect to his voice in this really smooth but still hard edged track. Parker really turns up the heat on the guitar with some blistering sections mixed into the cool smooth flow of the song despite the intense drumming. Got the Time is a short but really intense track. Before it Burns is a wah guitar track with some quite psychedelic parts and intense playing from all in the band. A few really cool effects are added here and there and some cool double tracked parts that make this one o the more wild tracks and he plays an sitar guitar like part as well. Awesome track. Stinging is another track featuring acoustic guitar and a nice way to bring things down. The lyrics are clearly about his old band mates and other important matters in his life. I think you can safely say that RM have developed a signature sound now. They reuse the same grooves and the vocal phrasing and dynamics but still manage to sound fresh and dynamic. Another great record but nothing really new..