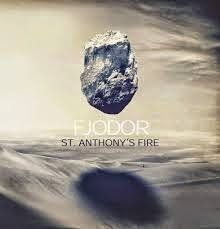 Zagreb, Croatia based psychedelic rock band, Fjodor are back with their first proper release. I have seen this band a few times and my band also played with them in Croatia. Super nice people and a very cool band. This record is basically one long trip split into two parts, so get ready…  Side one starts slowly with some synth, bass and drums before the guitar kicks in and things start to take off as Alojsa drives the pace. The band spaces out for a time and there are some really nice synthesizers before the band head into some really high intensity space rock and the rejse (travel, trip) begins.. The next melodic section has some really cool bass and drums by Mirko and Alosja. Dusan also compliments with a more dreamy synth line. Just as you are about maximally spaced out, they kick it up into high gear again and take off into the space rock again. Ivan plays some killer guitar but is mixed a bit too low for my taste. I really like the last section a lot as well. Great interplay between the bass, drums and then Fripp-King Crimson like guitar and into a super psychedelic piece. Wow.. Very cool dynamics on this side of the record. Same kind of vibe that Pyramidal, Arena, Øresund Space Collective get into with these long jams.

Side two the band slowly brings you in with a slow fade in of some nice melodic guitar, smooth bass and some spacey synths as Alosa works the drums slowly up and the intensity rises. A repetitive guitar riff that has a pretty hard edge takes the band into an almost progressive rock like work out with a lot of intense drumming before the band breaks out and the spacey synth sounds flood the soundscape and it gets really tripped out. Eventually Ivan just lets loose with some crazy guitar as well and the intensity rises to a near boiling point. They come down and there are some really nice delay guitar parts for an extended section before the trip ends with just drums…  Excellent record. Great work guys..


http://www.soundeffectsrecords.gr
Posted by Scott aka. Dr. Space at 11:05 PM